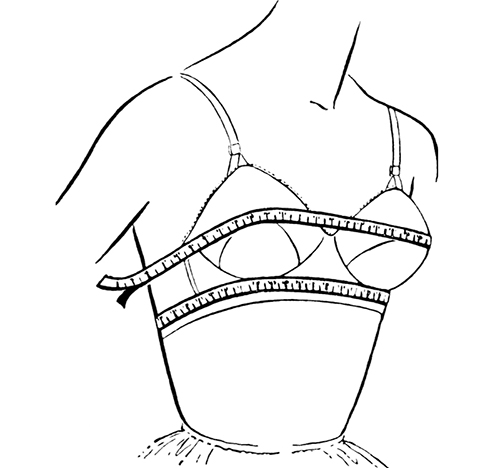 The bra size (also known as brassiere measurement or bust size) is the measure which indicates the size characteristics of a bra. Bra sizes are usually expressed as scales, with a number of systems being in use around the world. The scales take into account the band length and the cup size. From the wearer's point of view, the main measures that are taken into account, in determining the best bra fit for the wearer, are the measures of the wearer around the torso below the breasts and over the breasts, which defines the band length. For convenience, because of the impracticality of measuring a woman's breast size, the volume of the bra cup is based on the difference between these two measures.

Determining the correct bra size is the process manufacturers engage in to design and manufacture bras that correctly fit a majority of women, and for individual women, the process of identifying a correctly fitting bra. Bra sizes usually consist of one or more letters indicating the breast cup size and a number, indicating a band size around the woman's torso. Bra cup sizes were invented in 1932 and band sizes became popular in the 1940s.

The shape, size, position, symmetry, spacing, firmness, and amount of sagging of individual women's breasts vary considerably. Manufacturers' bra size labeling systems vary from country to country because no international standards exist. Even within a single country, one study found that the bra label size was consistently different from the measured size.As a result, about 25% of women have a difficult time finding a properly fitted bra.Some women choose to buy custom-made bras due to the unusual size or shape of their breasts.